The Harvard Club of St. Louis cordially invites you to attend a concert at Blue Strawberry by siblings Jocelyn and Chris Arndt, both recent graduates of the alma mater. They are rockers, with a big following in the northeast, and an emerging one  in the Heartland. This show marks their St. Louis Debut. Club members will have the chance to meet and greet with Jocelyn and Chris and each other immediately after the show.

What: Jocelyn & Chris at Blue Strawberry Showroom and Lounge 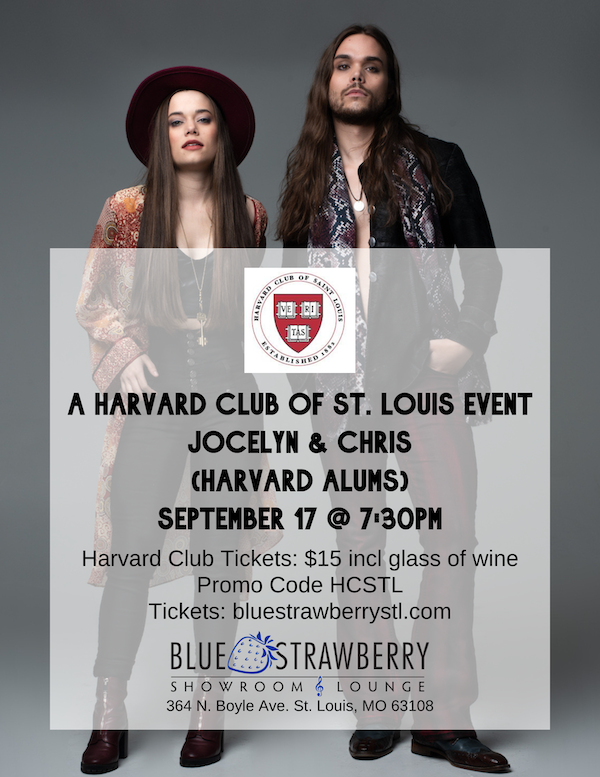 Following “Sugar and Spice,” Jocelyn & Chris released “Run Away,” an anthemic pop-rock track that channels the all-too-relatable feeling of losing hope - and then finding it again through a fresh perspective and a musical escape. “Run Away” premiered with Relix and has quickly garnered press and adds from MTV, Celebrity Access, Guitar World, and more. The infectiously powerful track was the Billboard Most Added song in Triple A radio in the US in its first week and has active support from 40+ stations nationwide, recently debuting in the Billboard Triple A Top 40.

And because radio centers on real people and their communities, Jocelyn & Chris have opted for a unique release approach that defies industry convention. Their album "Favorite Ghosts" was given to radio exclusively prior to offering the record via streaming services this fall. Personal connection has long made radio and the people who program it a special focus for Jocelyn & Chris - and the listeners at radio's heart will always be where they choose to tell their story first.

Look for Jocelyn & Chris and their band showcasing music from the new record on the road across the US this summer and fall on their Favorite Ghosts tour, including a first-time appearance at Bourbon & Beyond in Louisville, KY, and a return to Milwaukee’s Summerfest in addition to dates supporting New Pornographers, Filter, G. Love, and more. Media coverage for Jocelyn & Chris includes NBC Today Show, Baeble, Guitar World, American Songwriter, Huffington Post, NowThis, Paste, Daily Mail, Sirius XM, The Daily Beast, Cheddar TV, People, Jam in the Van, Hollywood Reporter, Boston Herald, and numerous others.