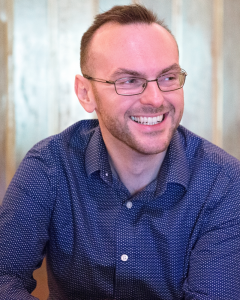 James is the Leader of the Ethical Society of St. Louis, one of the largest Humanist congregations in the world. The Ethical Society is similar to traditional religious congregations, offering community gatherings on Sunday mornings, a chance to socialize and connect with others, educational programs, and opportunities for activism. But the Society does not teach the beliefs of any traditional religion, making no reference to god or the supernatural, and including no religious rituals (such as prayer) in their programs. The hope of the Ethical Society is to be a place where all people can come and explore the biggest questions of human life - Why are we here? How do we know what is true? How should we treat each other? - regardless of their religious beliefs. James, in his position as Leader of the Society, is the community's professional clergy.

James is uniquely suited to this role. He has a lifelong interest in philosophy and human development, which led him to study education first at the University of Cambridge, then at Harvard, where he gained his master's and doctoral degrees. He has been honored with numerous prizes for academic excellence throughout his career, including Homerton College, Cambridge's Foundation Award (reserved for the most exceptional scholars of each graduating class), and the highly prestigious Frank Knox Memorial Fellowship, which supported his studies at Harvard. Since arriving in St. Louis, James has worked to increase the visibility of the Ethical Society, and to encourage the community to reclaim its long commitment to activism on behalf of social justice. A native of London, England, James lives in the Central West End with his husband Kolten and their darling dog Ella.