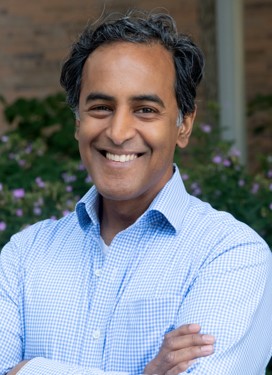 Milan G. Chheda (AB 1993) is a neuro-oncologist and neurologist and Assistant Professor of Medicine and Neurology at Washington University School of Medicine. He moved to St. Louis 4 years ago to start his laboratory, which focuses on developing new ideas to treat glioblastoma, a highly aggressive brain tumor. He treats patients with brain tumors in clinic.

Milan studied physics and mathematics in college, and came to medicine and research after spending time as a Wallenberg Scholar in Jerusalem and working in New York City government as an Urban Fellow. He trained in medicine at Albert Einstein College of Medicine in the Bronx, and remains interested in caring for patients in underserved areas. He completed medicine internship at Yale-New Haven Hospital and his neurology and neuro-oncology training in the Harvard system. He has two children, in 4th and 2nd grades, and is married to Jennifer Philips, who is also a physician-scientist at Washington University. Milan and his family have loved their time in St. Louis so far. Milan would like to contribute to Washington University having more engagement with the surrounding community and is interested in some day developing a high school program for students interested in cancer research. He is actively involved in the Harvard alumni interview program, and has served as the Co-Chair of Schools an Scholarships for the last two years.