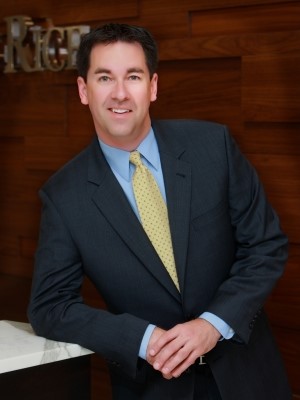 Michael Hickey is a member with Lewis Rice, a law firm founded in 1909 with more than 150 attorneys serving clients throughout the Midwest and across the country.  Michael focuses his practice on intellectual property litigation and enforcement, representing inventors and companies in diverse areas of technology, including computers and telecommunications, medical devices, DNA and genomics research, chemical applications, and exercise equipment.  His clients are individual inventors, startup companies, and significant market players, including one of the largest bicycle component manufacturers in the world.

Michael clerked for the Hon. Theodore McMillian of the U.S. Court of Appeals for the Eighth Circuit and has served as a professor of patent law for the Ongoing Examiner Education Program at the U.S. Patent and Trademark Office.  Michael previously chaired Lewis Rice’s Recruiting Committee and was selected for inclusion in Missouri & Kansas Rising Stars® 2010-2012 and Missouri & Kansas Super Lawyers® 2013-2018.  Michael was also named by The Best Lawyers in America® for 2019-2020 and listed as among the St. Louis Business Journal’s “40 Under 40” for 2011.

Michael has previously served as the President of the Board for Trailnet, which is dedicated to improving walking and biking opportunities throughout the St. Louis metropolitan region, and as a member of the St. Louis Zoo Association Board of Directors.  Michael has also volunteered legal services to Legal Services of Eastern Missouri through its Webster-Rock Hill Ministries outreach program for nearly 20 years.  Outside of work, Michael enjoys cycling, coaching grade school sports teams, and raising five children and five chickens (yes, they have fresh eggs every day!) with his wife Emily.